Why is the Porsche 968 still a popular choice among car enthusiasts? 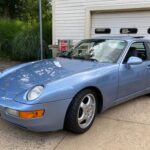 The Porsche 968 was a four-year production model in Coupe, convertible and limited edition Club Sport form. It sold under 2,000 examples in the United States and Canada during the first three years of production. In total, less than 4,500 examples were produced. This article will look at the car’s exterior and interior and discuss its performance.

Its styling resembles the 928

The Porsche 968’s styling is reminiscent of the 928, and Porsche fans will appreciate this fact. It is a fast and sure-footed roadster that is fun to drive, especially on winding roads. The engine is a big bore, too, which provides the car with great performance potential.

The Porsche 968 retains the best qualities of its predecessor, but it is much more streamlined. Its rear-wheel-drive setup and near-50:50 weight distribution help it excel at cornering. It also utilises the same suspension system as the 944 Turbo. Many automotive magazines considered [...]