Concept With no Cause: The Porsche Vision Spyder is a “little bastard” of the 21st century 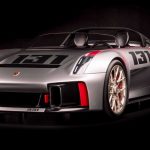 The 1993 silver Boxster car presaged Porsche’s first Boxster car, strongly compared to the 1955-1956 Porsche Spyder 550. After the Porsche Boxster was released in 1997, Porsche wasn’t completed with the 550 revivals; the German automaker released a 550 Boxster Edition Anniversary to celebrate the sports car’s 50th anniversary. Subsequently, the Spyder models kept the concept of Porsche 550. It ​is a lightweight sports car.

However, all of the expected Boxster 550 features are present: The fender flares, silver paint and the two-seater cockpit. Porsche’s designers added a “Little Rebel” license plate to the cover of the engine and beautiful retro louvers. Click here to view the best inventory of 718 Boxster S