Concept With no Cause: The Porsche Vision Spyder is a “little bastard” of the 21st century

Didn't you know that Porsche has recently been thinking about the original 550-1500 RS?

The 1993 silver Boxster car presaged Porsche’s first Boxster car, strongly compared to the 1955-1956 Porsche Spyder 550. After the Porsche Boxster was released in 1997, Porsche wasn’t completed with the 550 revivals; the German automaker released a 550 Boxster Edition Anniversary to celebrate the sports car’s 50th anniversary. Subsequently, the Spyder models kept the concept of Porsche 550. It ​is a lightweight sports car.

However, all of the expected Boxster 550 features are present: The fender flares, silver paint and the two-seater cockpit. Porsche’s designers added a “Little Rebel” license plate to the cover of the engine and beautiful retro louvers. 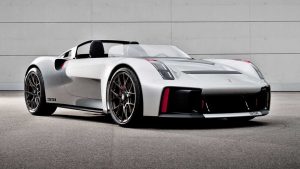 Certainly, Vision Spyder has a look you would expect from a 550 script in 2019. In our opinion, that doesn’t make it less amazing to see. New Porsche design cues like the taillight bar, boxy intake front have all been taken from the previous 911 Porsche. However, it all comes together, minimalist and purposeful, just like the original, due to the simple interior and frameless windows.

The slightly squared-off front and back fender peaks have a newness to them that is not similar to the latest or previous Porsche, especially at the end. Where you would expect the taillights to be, the fenders end in a kind of tough vertical line. Porsche claims to have studied the Porsche Spyder 550-1500 RS, driven by Hans Herrmann in the Carrera Panamericana in 1954. This likely explains the tail treatment and why Porsche included a cage like safety ring arrangement, missing from the latest 550.

So, what happened to the Porsche Spyder concept? Like current concepts, the automaker claims that the actual-size study will be used as “the basis for more development of Porsche combustion engine sports cars’ design identity.