The original concept is honored by the 25 Boxster six-cylinder.

It may be difficult to believe, but the Porsche 25 Boxster is nearly twenty-five years old. The original Boxster concept launched in 1993 at the Detroit Auto Show and the production model arrived in showrooms only three years later. 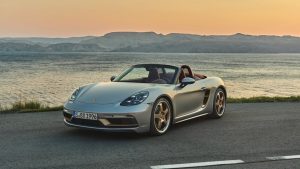 Porsche throws a little birthday party for the Boxster’s 25th anniversary with a special anniversary model. The 25 Boxster 2021 is a 718 GTS 4.0 Boxster with design cues that go back to the original Boxster concept. Neodyme is a gold to copper color that appeared on the Boxster OG concept wheels.

The 25 Boxster will be available in GT Silver Metallic, with Jet Black and Carrera White Metallic as options. The cabin is also inspired by the Boxster concept. A red convertible top and Bordeaux Red leather interior accentuate the silver paint and Neodyme accents. If you don’t like the look of red interiors, black leather is an option. However, if you want to pay respect to the original Boxster, go with silver over red. 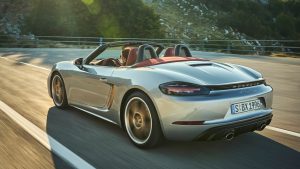 The 25 Boxster removes the four-cylinder turbocharged engines used in the standard Boxster 718. Additionally, it produces 394 horsepower and pairs with either a manual transmission 6 speed or Porsche’s dual-clutch 7-speed “PDK” automatic gearbox. The 25 Boxster top speed with the manual is 182 miles per hour, and it will reach sixty miles per hour on a dig in 3.7 secs if equipped with the PDK and Sport Chrono.

Other usually optional goods which come with the 25 Boxster include Porsche’s active suspension management and a mechanical limited-slip differential, also called Porsche Torque Vectoring. If you like this anniversary model, you need to pay $99,850 when it comes to dealerships this spring.