If there is an EV-related record, Porsche has possibly considered breaking it or already set it with the Taycan. The Taycan is the fastest four-door EV on the Nürburgring and has recently achieved the longest continuous drift in an electric vehicle. It is also the fastest EV in the Turbo S trim around Road Atlanta. And now it is the fastest car in the world, as long as we talk indoors.

Yes, it’s true, racing driver Leh Keen recently set the official Guinness Indoor Land Speed Record in a Porsche Taycan Turbo S. The fastest and quickest version of the Taycan was undoubtedly chosen due to its 750 horsepower. When we first tried the Taycan Turbo S in February of the previous year, it recorded an astonishing 0 to 60 miles per hour time of 2.4 secs. It is the fastest car we have tested and undoubtedly the perfect vehicle to set this record.

The New Orleans Convention Center was the location for this record. It covers more than 1 million sq. ft and home to the largest adjacent showroom in the United States.Like most convention centers, the NOCC floors are polished concrete, making them much slicker than standard road surfaces. The Taycan’s tires were heated for a little more grip and to help ensure that Porsche did not set the record for the highest speed of an indoors car accident instead. 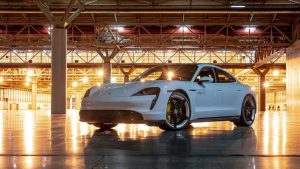 Additionally, this Taycan was missing headlights due to a stipulation that required any car attempting to set a new mark to be non-homologated, as was the previous record-setter, a rally-prepped Ford Fiesta driven by Tanner Foust.